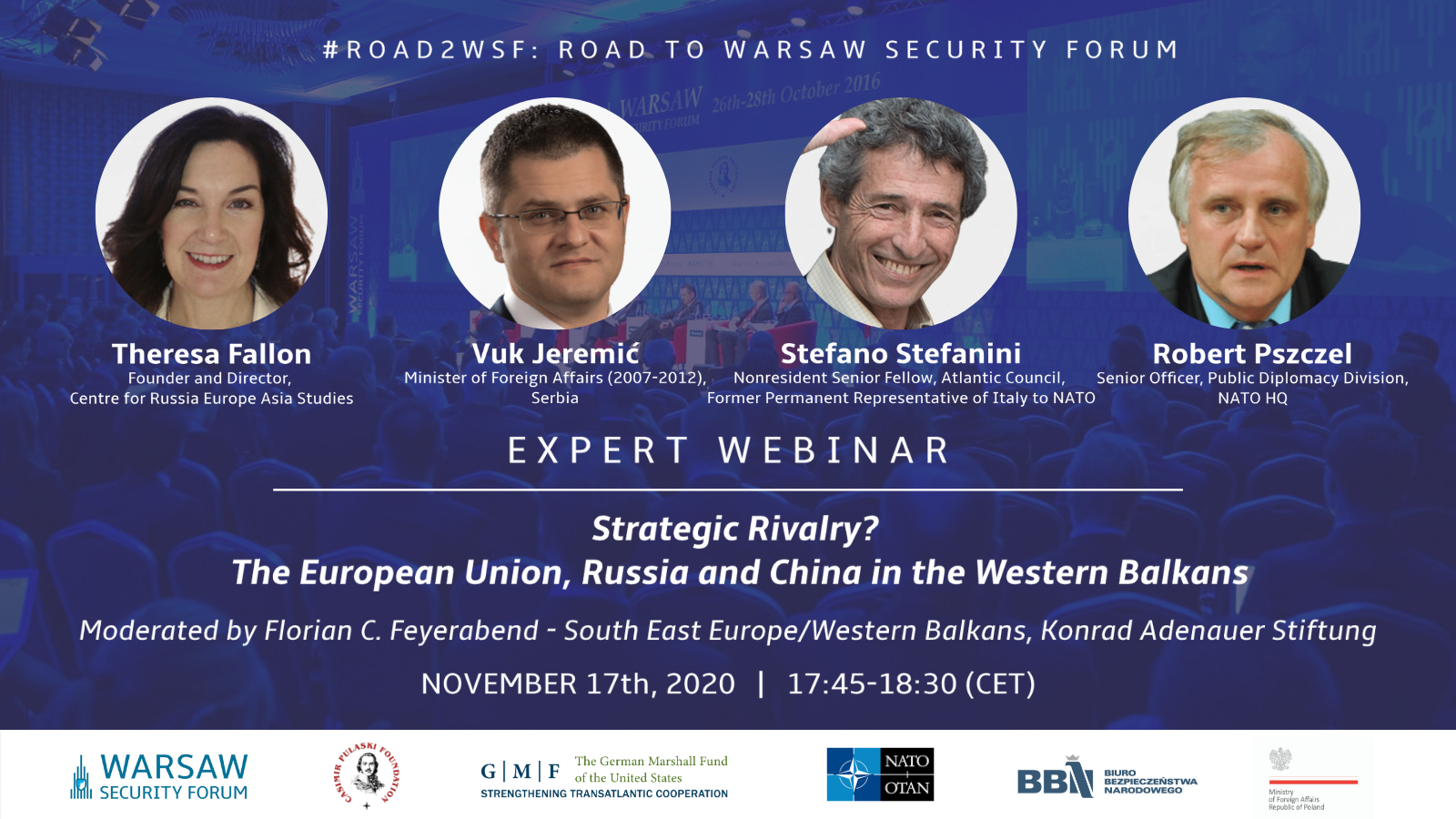 The expert webinar titled “Strategic Rivalry? The European Union, Russia and China in the Western Balkans” was the final session of the first day of the Road to Warsaw Security Forum. This session saw participants discuss the role of external powers in the Western Balkans and debate the possibility of the countries in the region joining the European Union. The panelists were Theresa Fallon (Founder and Director of the Centre for Russia Europe Asia Studies CREAS), Vuk Jeremić (Former Minister of Foreign Affairs of Serbia), Stefano Stefanini (Non-Resident Senior Fellow at the Atlantic Council and Former Permanent Representative of Italy to NATO) and Robert Pszczel (Senior Officer, Public Diplomacy Division, NATO). This discussion was moderated by Florian C. Feyerabend (Desk Officer, South East Europe/Western Balkans, Konrad Adenauer Stiftung).
The discussion began with panelists outlining the geopolitical importance of the Western Balkans and the interests of Russia and China in the region. Robert Pszczel emphasized the importance of the Western Balkans for NATO and the European Union. Despite joint military operations in the region between Russia and NATO during the 1990s, Pszczel gave examples of how some of Russia’s recent activities give the impression that it treats the region as an ideological battleground. With regard to China’s interest in the Western Balkans, Theresa Fallon acknowledged China’s strategic investment in infrastructure and that China prefers to work bilaterally despite there being multilateral agreements. Fallon used Serbia as an example to highlight the extent of Chinese investment in the country as it receives a third of Chinese loans in the region which introduces the possibility of Serbia becoming dependent on Chinese loans and economic support.
The state of democracy was a key topic and Vuk Jeremić stated that “Serbia has ceased to be a democracy” and that the country is now classified as a “hybrid regime” due to the lack of opposition and President Vučić’s policies. According to Jeremić, Serbia’s democratic degeneration on its path to becoming a member of the European Union is in the interest of Russia and China. Stefano Stefanini outlined his views regarding future transatlantic cooperation in the Western Balkans and what can be expected from a Biden administration. Stefanini also addressed issues relating to accession to the European Union for countries in the Western Balkans.
Other topics included the wavering appeal of the European Union in some countries, the process of becoming a member state and recent political conflicts in the Western Balkans, such as between Bulgaria and North Macedonia. The session concluded with the results of the poll which gave the results of the viewers’ opinions on countries in the Western Balkans joining the European Union in the near future.
Discussion co-financed by the Ministry of Foreign Affairs of the Republic of Poland as part of the public diplomacy 2020 grant scheme. The content of this video expresses only the views of the speakers and cannot be equated with the official position of the Ministry of Foreign Affairs of the Republic of Poland.