#Road2WSF | EXPERT WEBINAR | The Burning Borders: the future of EU relations with Belarus

#Road2WSF | EXPERT WEBINAR | The Burning Borders: the future of EU relations with Belarus 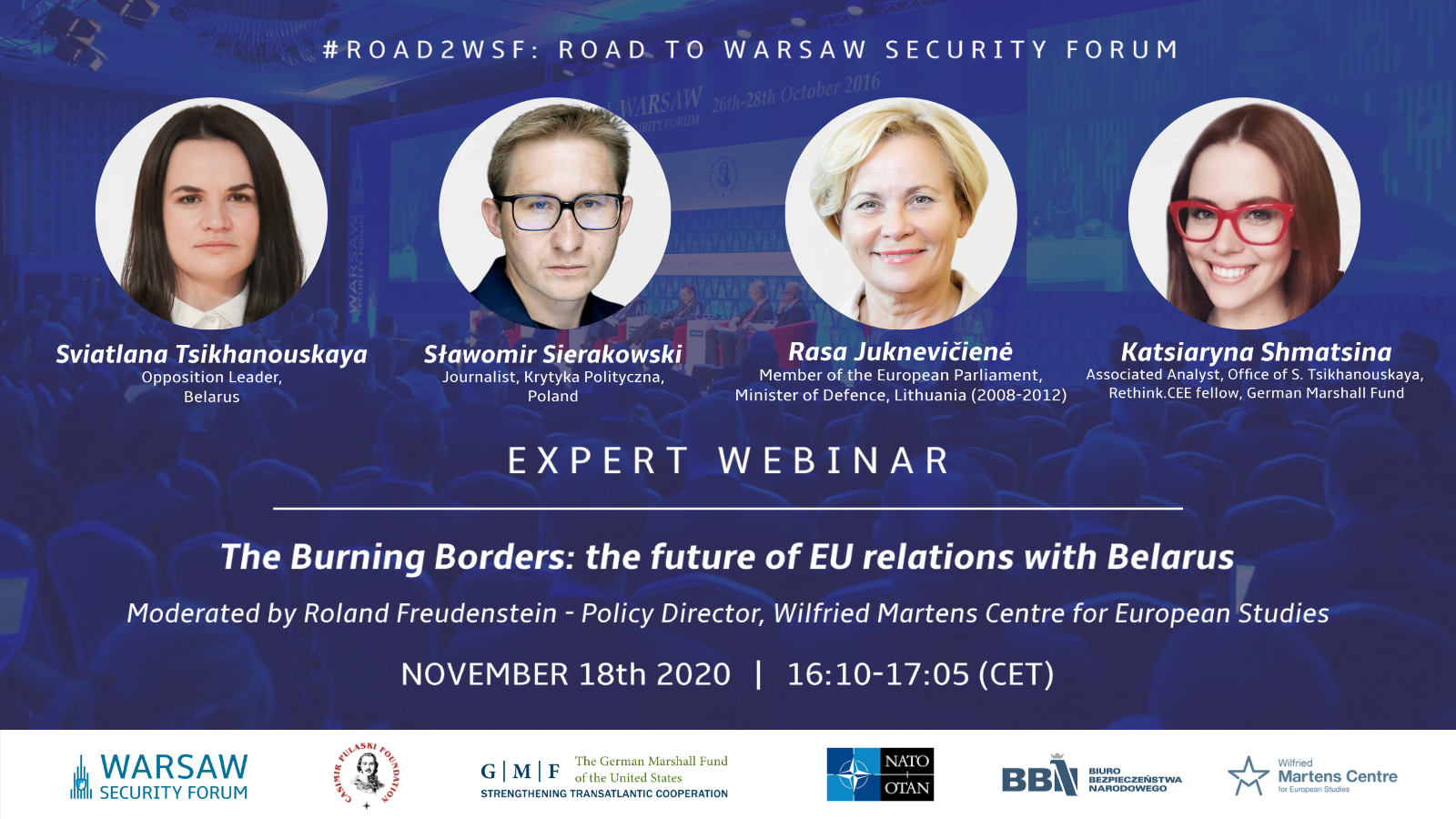 The panelists of the expert webinar titled “The Burning Borders: the future of EU relations with Belarus” were Rasa Juknevičienė (Member of the European Parliament, Minister of National Defence of Lithuania 2008-2012), Katsiaryna Shmatsina (Associated Analyst at the Office of Sviatlana Tsikhanouskaya, Belarus) and Sławomir Sierakowski (Journalist at Krytyka Polityczna, Poland). The panel was moderated by Roland Freudenstein (Policy Director at the Wilfried Martens Centre for European Studies, Belgium).
Before the discussion began, Belarusian opposition leader Sviatlana Tsikhanouskaya gave a presentation regarding the current situation in Belarus and the demonstrations across the country following the result of the presidential elections. She stated that “Belarus is a country in the heart of Europe which will always strive for peaceful and good relations with all its neighbours.” Tsikhanouskaya stated that a “new Belarus has emerged” in the wake of these protests: a sovereign, multilingual, diverse country based on the rule of law and focused on establishing constructive relations with its neighbours.  She ended her speech by appealing to the EU for further help and support in restoring democracy in Belarus.
The panelists began by discussing the future of EU relations with Belarus. Rasa Juknevičienė noted that “it is a crucial time for the EU to demonstrate that it firmly stands on the side of the Belarusian people because human  rights, democracy and rule of law are our common values. The EU has to stand up for them.” Juknevičienė proposed ways in which the EU could support Belarus, including international investigations, sanctions, assisting in the electoral process and ensuring the peaceful transition of power. Katsiaryna Shmatsina explained the view of Belarus from a Russian perspective and the Kremlin’s actions during the ongoing democratic crisis. Moscow understands that Lukashenko lost his legitimacy as President and last long without Russian support. The Kremlin has not yet endorsed either side, however Shmatsina acknowledged that supporting the democratic transition of power could pose a risk to Russia as it could see Belarus turn towards Europe and the West as well as  coinciding with the possibility of further protests in Russia. Sławomir Sierakowski commented on the protests, stating the importance of the Belarusian peaceful demonstrations and how they are united by a common agenda.
During the discussion a question was asked by a Young Leader concerning the role of female leaders in Belarusian politics who are opposing the patriarchal society, as well as questions received from the online audience about plans of the Belarusian opposition for the future and solutions for the transition of power.
The panel concluded by displaying the results of the poll titled “Has the EU done enough in helping the Belarusian civil society in facing the Lukashenko regime?”
This session was co-hosted with the Wilfried Martens Centre for European Studies, the official think tank of the European People’s Party which aims to influence and impact policy for the benefit of European citizens.