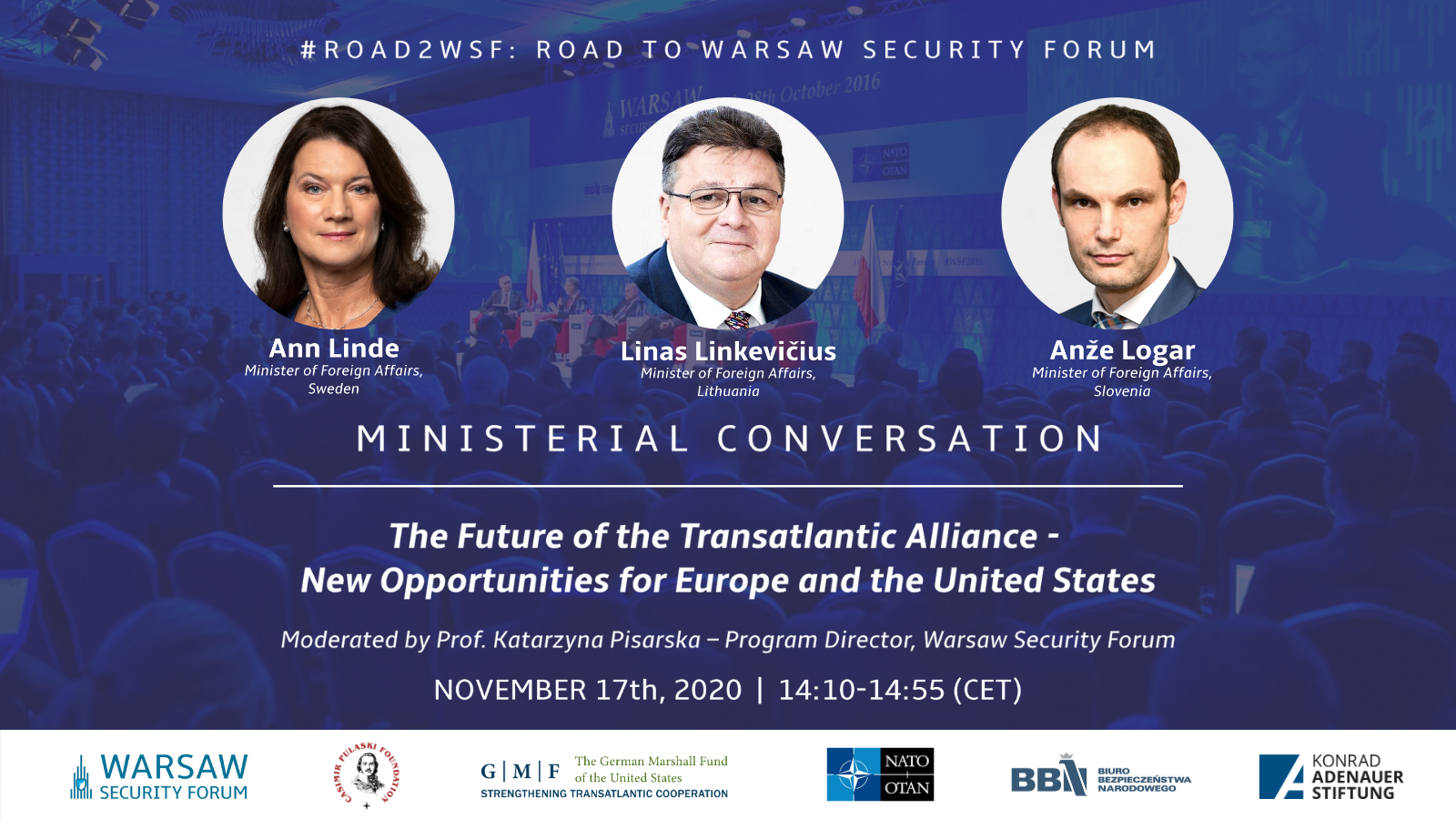 The panelists of this ministerial conversation were Ann Linde (Minister of Foreign Affairs of Sweden), Linas Linkevičius (Minister of Foreign Affairs of Lithuania) and Anže Logar (Minister of Foreign Affairs of Slovenia). The panel was moderated by Katarzyna Pisarska (Program Director of the Warsaw Security Forum).
The aim of the discussion was to determine new opportunities and challenges for Europe and the United States in the context of the US elections and strengthening position of China on the global stage.
The panel began with a discussion about the most pressing challenges facing the transatlantic Alliance. Ann Linde stated that a “strong transatlantic Alliance is key for both the security of Europe and the United States.” Although Sweden is not a member of NATO, its partnership with the Alliance plays an integral role in Sweden’s security policy, which contributes to ensuring peace in the Baltic region. Furthermore, Linas Linkevičius stressed the importance of acknowledging NATO’s accomplishments and launching initiatives to promote further cooperation. In addition, Anže Logar posed questions concerning the future of cooperation between the EU and the U.S., the need for a free trade agreement and the reestablishment of mutual trust and unity that correspond to the common strategic interests of both the EU and the U.S. The panelists then discussed the outcome of the U.S. presidential elections, its repercussions for the EU and how it will impact future transatlantic relations. According to Linde, the results of the elections point to the possibility of stronger cooperation with the U.S., particularly when it comes to climate change and promoting democratic values. Linkevičius emphasized the importance of the American presence in Europe for European security.
The questions from the Young Leaders were insightful and generated further discussion. The first question was about the EU’s view on China’s global ambitions and the second one referred to the Three Seas Initiative. The ministers commented on the increasing Chinese influence in the world and re-emphasized the need for further cooperation between European countries and the U.S. to tackle global issues.
The final part of the panel discussion included participant questions about the conflict in Nagorno-Karabakh and how NATO is preparing for the rise of artificial intelligence.
The discussion ended with the results of a poll which asked, “What is the greatest threat to the survival of the transatlantic Alliance?”