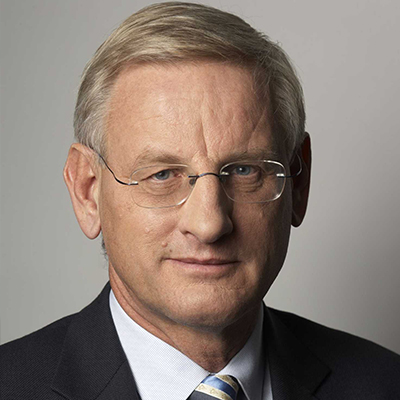 Carl Bildt attended the Stockholm University. He served as the Prime Minister of Sweden from 1991 to 1994. During his term, the government initiated major liberal economic reforms, as well as negotiated and signed membership agreement with the European Union.

Subsequently, he undertook a number of international functions within the EU and the UN, primarily related to the conflicts in the Balkans. Specifically, Bildt co-chaired the Dayton peace talks on Bosnia and became the first High Representative to the country. Later, he was the Special Envoy of UN Secretary General Kofi Annan to the region.

Returning to government in 2006-14 as the Foreign Minister, he became one of the most prominent and vocal of European foreign ministers during those years. He was one of the initiators of EU’s Eastern Partnership, and pushed for a new European Global Strategy.

He holds an honorary degree from the University of St Andrews and is a Distinguished Fellow at the Center for International Governance Innovation in Canada.