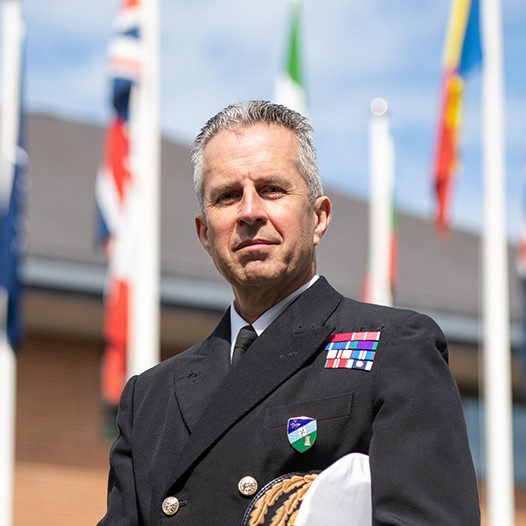 Keith Blount is the Commander of NATO's Allied Maritime Command. He is NATO's principal maritime adviser and has operational Command of NATO's Standing Naval Forces.

He joined the Royal Navy in 1984 as a helicopter pilot. He received his wings in 1986 and was a front line aviator at the age of 20. Through a varied flying career, he qualified as an instructor and flew in the Royal Navy Helicopter Display Team.

Blount has blended his aviation experience with a broad span of time at sea and in Command. He has sailed in NATO Task Groups during Operation Sharpguard and Operation Active Endeavour and worked together with NATO during periods with the Combined Maritime Forces and EUNAVFOR. He has commanded three warships, including the helicopter carrier HMS OCEAN and was the Iraqi Maritime Task Group Commander during Operation TELIC. More recently, he was the United Kingdom's Maritime Component Commander, based in Bahrain, spanning Operations in Syria and Iraq.

His staff appointments have included three periods in the Ministry of Defence and his last London assignment was as Military Assistant to the Vice Chief of the Defence Staff. He holds a Master of Arts degree in Defence Studies, was appointed Officer of the Order of the British Empire in 2012, Companion of the Order of the Bath in 2018 and is a Fellow of the Royal Aeronautical Society. He is the President of the Royal Navy Winter Sports Association.