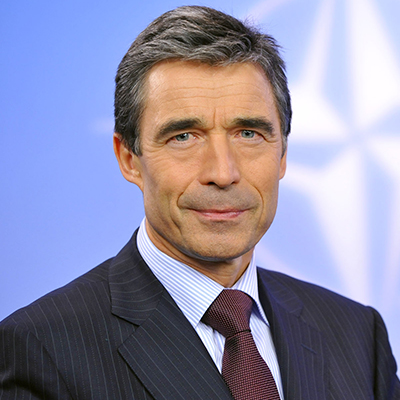 Mr. Rasmussen has a rich political background. During the 1980s, he played a key role in Danish foreign and economic policy, serving as deputy chairman of the Liberal Party and Minister of Taxation. Rasmussen was promoted to Minister of Economic Affairs in 1990 and served as the Danish negotiator of and signatory to the Maastricht Treaty, which eventually led to the introduction of the single currency, the euro.

In 1998, Mr. Rasmussen became chairman of the Liberal Party and leader of the Danish opposition. In the parliamentary elections 2001, his party won a landslide victory and became the biggest party in the Danish parliament. He formed his first government, and became Prime Minister of a coalition consisting of the Liberal Party and the Conservative People’s Party. His government was re-elected in 2005 and 2007 respectively, and he held the position as Prime Minister until he was elected as future NATO Secretary General at the Strasbourg-Kehl Summit in April 2009.

Mr. Rasmussen took office as the North Atlantic Treaty Organization’s 12th Secretary General on August 1, 2009 and held that position until September 30, 2014. His tenure marked a fundamental transformation of the Alliance. Mr. Rasmussen oversaw the Alliance’s operational peak with six operations on three continents including Afghanistan, Kosovo and Libya, as well as counter-piracy along the Somali coast, a training mission in Iraq and a counter-terrorism operation in the Mediterranean.

In October 2014, Mr. Rasmussen founded the company Rasmussen Global advising clients on a wide range of issues such as international security, transatlantic relations, the European Union, and emerging markets.