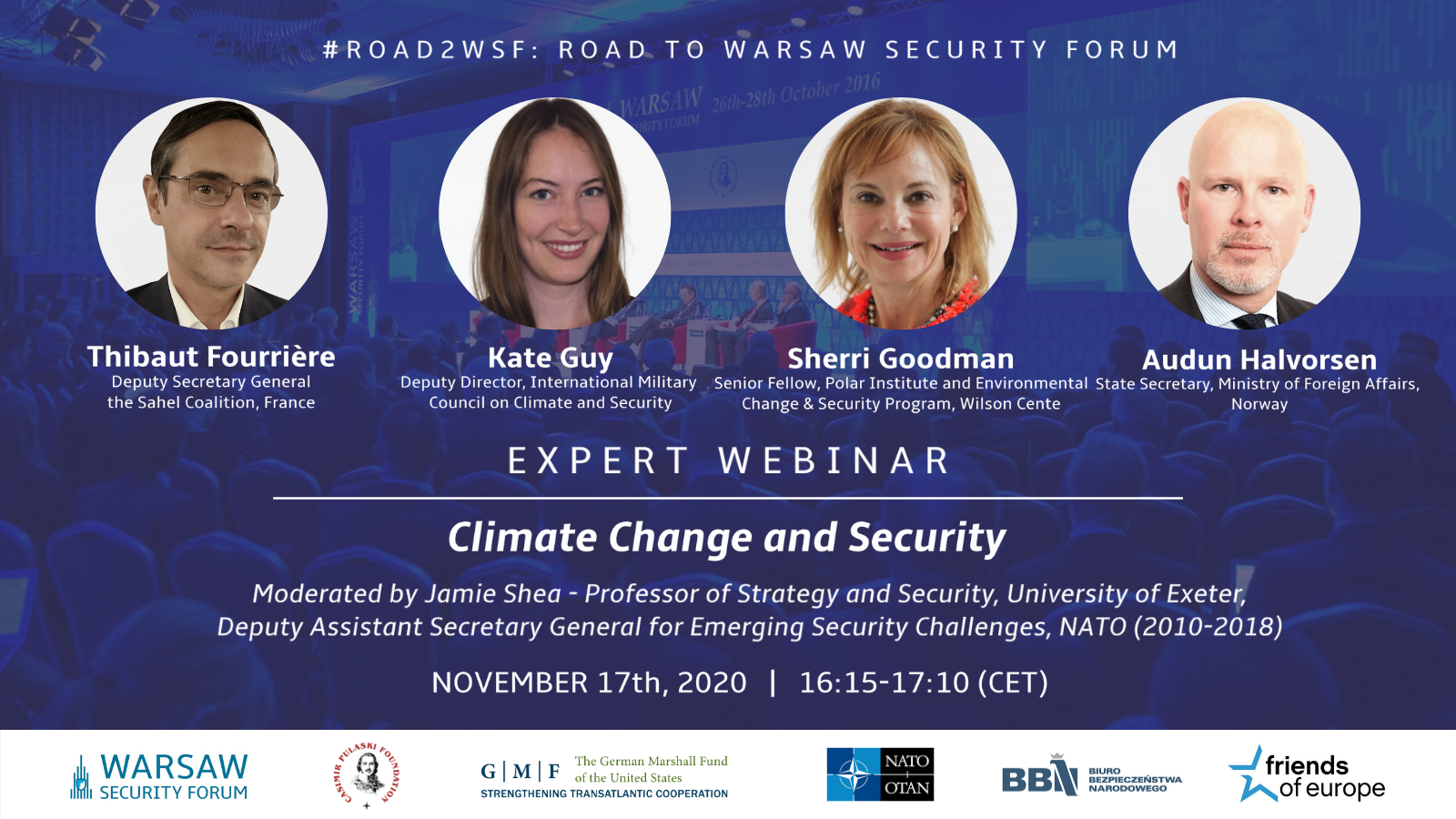 The expert webinar titled “Climate Change and Security” was the third panel discussion of the day. The participants of this discussion were Thibaut Fourriere (Deputy Secretary General of the Sahel Coalition), Kate Guy (Deputy Director of the International Military Council on Climate and Security and Senior Research Fellow at the Center for Climate and Security), Sherri Goodman (Senior Fellow at the Wilson Center’s Polar Institute and Environmental Change & Security Program) and Audun Halvorsen (State Secretary, Ministry of Foreign Affairs of Norway). The moderator of the discussion was Dr. Jamie Shea (Professor of Strategy and Security at the University of Exeter). Key topics of this discussion included the climatization of security and how militaries are adapting to tackle climate change. This session was co-hosted with Friends of Europe.
The session opened with Dr. Jamie Shea expressing the importance of tackling climate change despite 2020 being dominated by COVID-19. Sherri Goodman stated that we are in the era of climatization of security and that climate change is a threat multiplier as everything is affected by climate change, therefore it is critical to include the climatization of security in national security strategies. Audun Halvorsen agreed with Sherri Goodman that the climatization of security must play a key role in security agendas. Halvorsen also expressed his concern with the situation in the Arctic where temperatures have been increasing for 31 consecutive years.
Having discussed the importance of the Arctic, the focus shifted to the Sahel region. Thibaut Fourrier spoke about the Sahel coalition which brings countries and international institutions together to provide financial support for the region as it is particularly vulnerable to the effects of climate change. As well as being threatened by climate change, Fourrier outlined other challenges faced in the region, such as poverty, famine, rapid population growth, gender inequality and political instability.
Kate Guy focused on the role of militaries in fighting climate change and called for urgent action. She also noted that the Department of Defense of the United States is one of the largest fossil fuel consumers which highlights the need for the climatization and adaptation of the U.S. military to reduce its impact on the environment.
The Paris Agreement was a topic of discussion as it represents the establishment of a global initiative to fight climate change. Kate Guy also highlighted that the NATO Secretary General identified climate as a priority for the next 30 years which will hopefully lead to increased cooperation in tackling the issue. The panelists then discussed the possibility of climate wars which refers to the fight for limited resources. The participants agreed this emerging security threat must also be prioritized and that people living in vulnerable regions should be provided with basic economic needs.
The session concluded with the results of the poll which asked viewers whether their country’s military has started adapting to challenges presented by climate change.