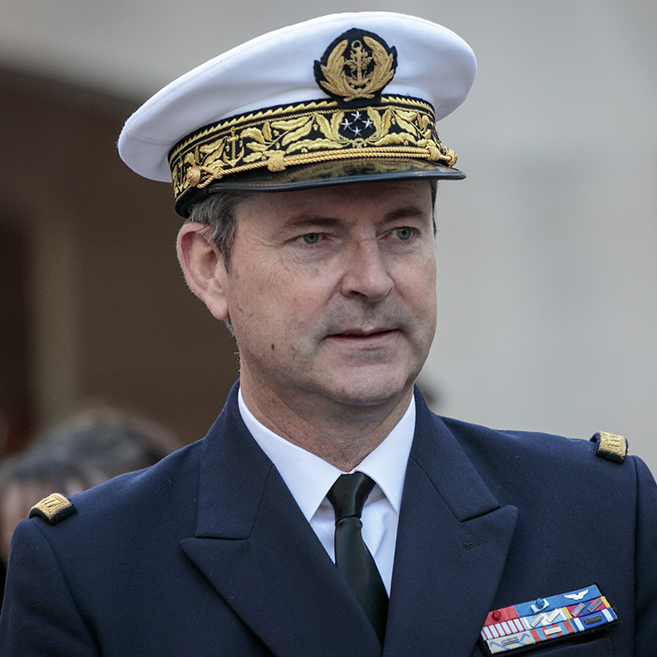 Graduated from the French Naval Academy, Admiral de Bonnaventure has deployed to most challenging posts in the Navy and has served as navigator, jet pilot, executive officer, operation officer and commanding officer on-board patrol boat, frigate, squadron and aircraft carrier. He was assigned as commanding officer frigate La Fayette, undertaking operations "Enduring Freedom" and "Active Endeavor", respectively in the Indian Ocean and the Arabian Gulf, and in the Eastern Mediterranean off Lebanon, and a long FrenchGerman deployment around Europe from Black Sea to Island.

Ashore, he has served in doctrine at the Naval Action Force staff in Toulon, in operations and strategic surveys, at the Joint Operational Planning & Command Center in Paris, covering Afghanistan operations plus Indo-Pacific and Latin America countries, in procurement at the Navy staff, conducting French-UK Carrier programme, and at the politico-military level as Head of the "Preparing for the future" cell and as Naval Advisor to the Minister of Defence in his military cabinet.

On promotion to flag rank, the Admiral has been in Command of the French Naval Aviation during three years and then joined the Joint staff as the Director of Force Employment Division during two years. Since July 2016, he was appointed deputy Director General for International Relations and Strategy and promoted to Vice Admiral.

Vice Admiral de Bonnaventure graduated from the US Naval Command college course in Newport, the French Centre for Higher Military Studies, and the Institute of advanced studies of National Defence.