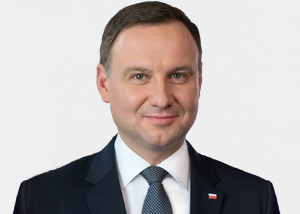 President of the Republic of Poland

Following the parliamentary elections of 9 October 2011, running from the Law and Justice list in the Kraków constituency I was elected deputy to the Sejm with 79 981 votes. In the Sejm, I served as Deputy Chair of the Committee for Constitutional Liability.

On 27 November 2013, I assumed the position of a press spokesman for Law and Justice. I continued in this capacity until 9 January 2014, when the Political Committee of Law and Justice appointed me chief of campaign in the forthcoming elections to the European Parliament.

On 6 August 2015, having taken the oath of office before the National Assembly, I assumed the office of the President of the Republic of Poland.