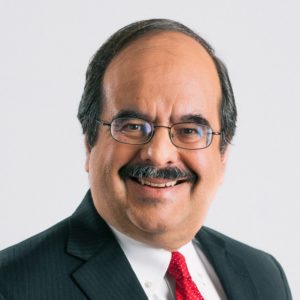 According to international research firms such as Gallup, Alhurra and Radio Sawa have an unduplicated weekly reach of more than 25 million people in the Middle East. Sponsored by the U.S. Government, MBN’s mission is to broadcast accurate, timely and relevant news and information about the region, the world and the United States to a broad, Arabic-speaking audience.

Prior to joining MBN, Amb. Fernandez was Vice-President of the Middle East Media Research Institute (MEMRI), and is a member of the board of directors at the Center for Cyber and Homeland Security (CCHS) at George Washington University. He is also a non-resident Fellow in Middle East Politics and Media at the TRENDS research and advisory center in Abu Dhabi, United Arab Emirates.

He was a Foreign Service Officer from 1983 to 2015 and served as the State Department’s Coordinator for the Center for Strategic Counterterrorism Communications from 2012 to 2015. He also served as U.S. Ambassador to Equatorial Guinea and U.S. Charge d’Affaires to Sudan.  He held senior public diplomacy positions at the U.S. embassies in Afghanistan, Jordan, Syria, Guatemala, Kuwait, and in the Department’s Near East Affairs (NEA) Bureau.

Amb. Fernandez was a career member of the U.S. Senior Foreign Service with the rank of Minister-Counselor, he was a recipient of a 2008 Presidential Meritorious Service Award, the 2006 Edward R. Murrow Award for Excellence in Public Diplomacy, a 2003 Superior Honor Award for his work in Afghanistan, among many other awards.

A graduate of the University of Arizona (B.A. and M.A.) and the Defense Language Institute, he served in the U.S. Army and came to the United States as a refugee from Cuba in 1959. He has published in Soundings: An Interdisciplinary Journal, the AFPC World Almanac of Islamism, Defense Dossier, Journal of International Security Affairs, Providence, WINEP Policy Brief, the Foreign Service Journal, Cipher Brief, MEMRI, Brookings Markaz, Georgetown Cornerstone, ReVista: the Harvard Review of Latin America, Middle East Quarterly, the Journal of the Assyrian Academic Society (JAAS), and lectured and debated on U.S. foreign policy in numerous international and academic venues.   He speaks fluent Spanish and Arabic in addition to English.